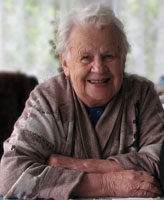 Vera Nikolaevna Kublanovskaya, 1920–2012
Vera Nikolaevna Kublanovskaya passed away on February 21, 2012, at the age of 91. She was the last surviving member of the generation that shaped modern numerical linear algebra, a group that included George Forsythe, Alston Householder, Heinz Rutishauser, and James Wilkinson. She is most widely known as one of the inventors of the QR algorithm for computing eigenvalues of matrices. Her range/nullspace separation algorithms form the foundation for all later work on algorithms for the Jordan and Kronecker canonical forms of matrix pencils.

Born on November 21, 1920, Vera Nik-olaevna Kublanovskaya was one of nine siblings in a farming and fishing family in Krokhono, in Vologda Oblast, Russia. Krokhono was a small village on the bank of Lake Beloye, where the river Sheksna had its source. Vera went to normal school in Belozersk, a city 18 km from Krokhono that dates back to 862 and lies about 430 km east of Leningrad and 470 km north of Moscow.

In 1939 she began studies at the Gertzen Pedagogical Institute in Leningrad to become a teacher. There she met and was encouraged to pursue a career in mathematics by Dmitrii Konstantinovich Faddeev (1907–1989). In 1942, she was obliged to return home because her mother was seriously ill. In 1945, at the end of a stay prolonged by the siege of Leningrad, she wrote to Faddeev. Upon his recommendation she was immediately accepted to study mathematics at Leningrad State University, without undergoing the usual obligatory entrance testing. She graduated in 1948 and then joined LOMI, the Leningrad Branch of the Steklov Mathematical Institute of the USSR Academy of Sciences. She was a member of the staff there for the remaining 64 years of her life.

At first she worked on a secret nuclear engineering project, from which she retired in 1955. During those years she bore two sons and, in 1955, finished her candidate's thesis for a PhD, on the application of analytic continuation to numerical methods. At about that time Leonid Vitalievich Kantorovich (1912–1986) was organizing a group in Leningrad to develop a universal computer language, Prorab, for BESM, the first electronic computer in the USSR, which was completed in 1954 in Moscow. Vera joined the group; her task was to select and classify matrix operations that are useful in numerical linear algebra. This experience brought her close to numerical linear algebra and computation. In 1972 she obtained her secondary doctorate, the Habilitation; this time her theme was the use of orthogonal transformations to solve algebraic problems. In October 1985 Vera Nikolaevna Kublanovskaya was awarded an honorary doctorate at Umeĺ University, Sweden, a place she visited several times and where many researchers who continue her work are active to this day.

Kublanovskaya's 1961 paper "On Some Algorithms for the Solution of the Complete Eigenvalue Problem," together with two papers by John G.F. Francis, published independently in the same year, forms the basis of the QR algorithm for computing the eigenvalues of an unsymmetric matrix. Kublanovskaya's paper also presents a convergence proof of the QR algorithm based on sophisticated determinantal theory.

Her 1966 paper "On a Method for Solving the Complete Eigenvalue Problem for a Degenerate Matrix," translated from the Russian in 1968, was another milestone in this area. There she presented a method for computing the Jordan structure of a multiple eigenvalue by unitary similarity transformations, which laid the foundation for the so-called staircase algorithms. This paper stimulated several subsequent papers by different authors on the numerical computation of the Jordan and Kronecker canonical forms, and several groups developed mathematical software.

She continued her work on finding canonical forms of polynomial and rational matrices, leading to a 202-page survey: V.N. Kublanovskaya, "Methods and Algorithms of Solving Spectral Problems for Polynomial and Rational Matrices" (Journal of Mathematical Sciences, Vol. 96, 2005, pages 3085–3287; translated from Zapiski Nauchnykh Seminarov POMI, Vol. 238, 1997, pages 7–328). This was not the end; she continued to work on nonlinear and two-parameter matrix pencils. A 2009 paper in the same translated journal is titled "To Solving Problems of Algebra for Two-parameter Matrices. Part I."

It was remarkable to follow Vera at work, always serious, happy to hand over her results to younger people in other places. In her own research she always pursued a new problem with the same eagerness as in all her previous projects, all the way to the finished result--which was so clearly built up that it looked as if it had always been there. All of us feel privileged to have been close to a great scientist!---Bo Kĺgström, Umeĺ University, Sweden; Vladimir Khazanov, St. Petersburg, Russia; Frank Uhlig, Auburn University, Alabama, USA; and Axel Ruhe, Royal Institute of Technology, Stockholm, Sweden.