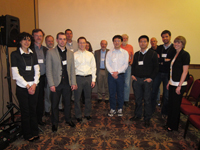 Finalists in the BGCE competition presented their work in Reno; shown here in the front row, from left, are Marta DÆElia, Andrew Gordon, Michael Frasca, Xianyi Zeng, Zhu Wang, Andrea Manzoni, who received the prize, and Andrea Hawkins-Daarud (finalist Zhang Yang is not pictured). From left in the back row are prize committee members Ulrich R³de, Peter Turner, Hans-Joachim Bungartz, Carol Woodward, Kirk Jordan, Max Gunzburger, and Omar Ghattas.
It's becoming routine in the best sense of the word: Following successful runs in Costa Mesa (2007) and Miami (2009), the SIAM Conference on Computational Science and Engineering (Reno, Nevada, February 28¢March 4) once again hosted the student paper competition sponsored by the Bavarian Graduate School of Computational Engineering (BGCE). Open to both undergraduate and pre-PhD graduate students, this biannual competition aims to highlight and promote outstanding student research in CSE that embodies the essence of the field, combining high-level methods from applied mathematics and computer science with challenging applications from science or engineering.

This year, 22 students representing 21 research institutions in ten countries had submitted the required four-page extended abstracts. Based on the quality and relevance to CSE of those submissions, eight finalists from four countries were invited to present their work and results in two special sessions in Reno:


Those in the audience who had also attended the prize sessions in 2007 and 2009 surely had a sense of dķjÓ vu: Again, the students' work reflected almost perfectly our definition of CSE research; together, the presentations covered a broad range of thriving applications, state-of-the-art modeling and computational methods, and efficient tools and implementations. Again, many who listened to the excellent presentations considered them amongst the best given at the conference. And again, the judges were left with a difficult task.

In deliberations after the presentations, the members of this year's international prize committee---Omar Ghattas, Max Gunzburger, Kirk Jordan, Peter Turner, Carol Woodward, Hans-Joachim Bungartz, and Ulrich R³de---assessed the students' work on the basis of the following criteria: scientific depth, importance, CSE relevance, quality of the written paper, quality of the presentation, and relative maturity of the work.

On Friday morning, R³de and Bungartz presented the 2011 BGCE Student Prize to Andrea Manzoni. As stated in the citation, the work was impressive in that it combined several leading-edge modeling and numerical concepts with fascinating applications, such as hemodynamics and the shape optimization of bypasses, in a high-level piece of computational research.

The prize consists of an invitation for a one-week visit to BGCE's home universities, Universitõt Erlangen¢N³rnberg and Technische Universitõt M³nchen. Manzoni will give talks at both, but he will also be introduced to Bavaria (which, at least in terms of landscape, should not be too different from Lausanne). He joins the company of Alfonso Bueno-Orovio (2007) and Gisela Widmer and Chad Lieberman (2009) as recipients of this prestigious award.

While the location of the next SIAM CSE conference is not yet fixed, of one thing there is no doubt: There will be a fourth BGCE Student Prize competition, and we all look forward to it already!---Hans-Joachim Bungartz (M³nchen), Ulrich R³de (Erlangen¢N³rnberg), Peter Turner (Clarkson), and Carol Woodward (Lawrence Livermore Lab).