Motivated by industrial fluids problems and the 2010 oil spill in the Gulf of Mexico, my group at UCLA has been modeling slurry flow. As described in my invited talk at ICIAM 2011, the group has been studying the dynamics of oil–particulate mixtures, both through modeling and simulation and through physical experiments performed in the Applied Mathematics Laboratory at UCLA. The project described in the talk involves significant training of students and postdocs---including undergraduate teams of four or five students in the applied math
lab. The work has produced two PhD theses in applied math, and four postdoc-
toral scholars have been closely involved in the project.

My interest in this problem arose from interactions with Anette Hosoi's group at MIT. The original experimental work, done at MIT, led to the design of a new experimental apparatus for UCLA's applied math lab (see Figure 1). 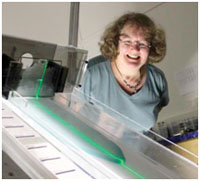 Figure 1. Left, Andrea Bertozzi with the slurry apparatus in the Applied Mathematics Lab at UCLA. Right, oil buried in the sand on the Gulf of Mexico (courtesy of Ping Wang, USF).

Study of the Gulf oil spill has led to interesting observations of the dynamics of oil on beaches, including oil trapped in the sand after Hurricane Alex in June 2010 (Figure 1, right). The UCLA team has answered a question of fundamental importance concerning the dynamics of oil on beaches. In lab experiments with an oil–sand mixture on an incline, the group found what appears to be a bifurcation in dynamics: In some situations particles settle to the substrate, and clear oil separates from the particles; in other situations the oil and particles stay well mixed. See Figure 2.


As a PhD student at UCLA, Benjamin Cook proposed an equilibrium theory (published in Physical Review E in 2008) for this behavior that balances shear-induced migration of particles in the flow with hindered settling. In months of experiments, a team of UCLA undergraduates, mentored by postdoc Nebosja Murisic, tested the theory in the lab, varying the viscosity of the oil and the size of the particles. The result is a detailed set of data showing clear agreement with Cook's theory, as well as the role of timescales in the settling dynamics. This work was recently published in Physica D.

The UCLA group is also developing dynamic models and numerical algorithms for the models. Matthew Mata, while a PhD student at UCLA, designed an alternate-direction-implicit scheme for a dynamic continuum model of these flows. To simulate fingering instabilities, his model includes surface tension effects. Surface tension is known to be computationally stiff, and the design of the scheme is complicated by the need to solve a system of equations describing both the dynamics of the mixture and the motion of particles within the mixture. Classical ADI schemes are well suited to modern parallel computing platforms. Mata's code runs on a multicore machine using OpenMP and achieves close to linear speedup in the parallelization. His results agree well with the physical experiment, as shown in Figure 2 and in a paper on the work that appeared in the Journal of Computational Physics in 2011.

The team is now developing new models for the flow dynamics, with the equilibrium theory as a base state and in combination with ideas from lubrication theory in thin films. In earlier work on this problem (Cook et al., SIAM Journal on Applied Mathematics, 2008; Zhou et al., Physical Review Letters, 2005), researchers analyzed shock formation in dynamic models, including predictions of the speed of the front and the role of hindered settling in the dynamics of the shocks. The new dynamic model is aimed at understanding problems not captured by previous work (see Figure 3). The team is also working on models involving both oil and water that can complicate the dynamics of particulate settling. 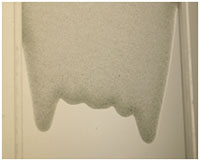 Acknowledgments
The UCLA team is currently supported by an NSF RAPID grant through the Division of Mathematical Sciences and a UC Lab Fees Research grant.

Andrea Bertozzi is a professor of mathematics at UCLA; she has been director of applied mathematics since 2005. Her invited talk at ICIAM 2011 was titled "Particle-laden Viscous Fluids and the Gulf of Mexico Oil Spill."