On the program of this year's SIAM Conference on Parallel Processing in Scientific Computing, held February 15–17 in Savannah, Georgia, was the awarding of two prizes: the SIAG/SC Career Prize, to Rob Schreiber of the Exascale Computing Lab at Hewlett Packard Laboratories, and the SIAG/SC Junior Scientist Prize, to Torsten Höfler of the National Center for Supercomputing Applications at the University of Illinois, Urbana–Champaign. Created in 2009 by the SIAM Activity Group on Supercomputing, the prizes were presented by the inaugural (2010) recipients, Jack Dongarra (University of Tennessee, Knoxville) and Kamesh Madduri (Pennsylvania State University), along with SIAG/SC chair David Bader of the Georgia Institute of Technology. 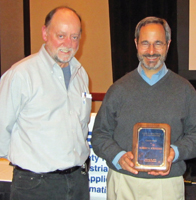 SIAG/SC Career Prize recipient Rob Schreiber (right) was cited "for his contributions to numerical linear algebra and parallel computing; for the breadth, depth, and transferability of his research to industry; and for his service to the community." In a prize lecture titled "It Seemed Like a Good Idea at the Time," Schreiber, who is shown here with Jack Dongarra, reflected on his career-long effort "to make very fast, very parallel computing work for solving the most difficult problems science poses."