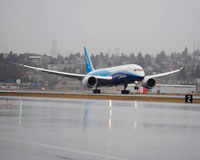 The Boeing Dreamliner. The mathematics underlying the design---completely by computer---of the first commercial airplane made mainly of composite materials is the subject of one of 18 case studies featured in SIAM’s recently updated Mathematics in Industry report.
In 2008, with funding from the National Science Foundation, SIAM set out to extend and update one of its most influential projects: a study and report (published in 1996) on industrial mathematics. The new version, titled Mathematics in Industry, appeared earlier this year.*

Although many of the insights from the 1996 report remain valid, the "landscape of mathematical and computer sciences in industry has changed," the updated report states. "Organizations now collect orders of magnitude more data than they used to, and face the challenge of extracting business enhancing information from it. Computing technology has continued to advance rapidly, and companies are making more and more aggressive use of high-performance parallel computing."

At the same time, the U.S. economy has evolved. By 2010, manufacturing, which once dominated the U.S. GDP, was surpassed by the combination of scientific and technical services and finance. And new programs have been created by both government agencies and private foundations to address educational deficiencies that have prevented a full flourishing of mathematics in industry since the earliest days. Among the new programs are the National Science Foundation's GOALI (Grant Opportunities for Academic Liaison with Industry), the Department of Energy's expansion of its Computational Science Graduate Fellowship program, and Alfred Sloan Foundation-funded efforts to develop professional master's degrees.

Like its predecessor, the 2012 MII report is built on interviews with mathematicians and managers in industry. What's new is mainly a section titled "Trends and Case Studies" that should be informative both to academic departments interested in forming or improving programs in industrial math and to students hoping to learn about, and be educated for, rewarding careers outside academia.

An eye-catching case study in the manufacturing category considers the use of mathematics (multidisciplinary design optimization and CAD) in the production of the Boeing 787 Dreamliner. Shown on the front page of this issue of SIAM News landing at the end of its maiden flight, the Dreamliner, made mainly of composite materials (carbon fiber-reinforced plastic), posed many engineering challenges: Citing the plane's wings, which "flex upwards by three meters during flight," the report points out that "traditional rigid-body models, which describe the wing's shape correctly in the factory or on the ground, do not describe it correctly during flight. To an aerodynamic and a structural engineer, it looks like two different wings---and yet both engineers have to work from the same computer model."

Stimulating in a different way is the final case study, "Serendipity." Beginning with the truism "In any commercial enterprise, basic research with no foreseeable bottom-line impact is always the hardest kind of R&D to justify," the item goes on to present a remarkable counterexample: the 2008 discovery of the memristor at HP Labs.