Figure 1. Energy models with thousands of uncertain parameters are efficiently sampled with dynamical systems algorithms to quantify the uncertainty in their predictions and to identify the parameters that have the most impact on this uncertainty.
Bryan Eisenhower

If only occupants of commercial buildings knew even roughly how much energy their buildings consume, talk of high-performance buildings would be as common in popular media as news snippets about electric and hybrid vehicles. The truth is, personal transportation consumes only about three quarters of the amount of energy needed to run the buildings we live and work in, educate our students in, and use as healthcare and retail facilities. Buildings account for approximately 40% of the energy consumed in the United States, and this has been the case for decades. Unfortunately, much of this energy is wasted---either because designs are poor or fragile, or because daily operation strategies are deficient. This presents a ripe opportunity for applied mathematicians.

The physics underlying these shortcomings includes a wide range of scales in both time and space, a vast collection of networked systems of systems across different physical domains and manufacturers, as well as uncertainty in model-based energy predictions and in the eventual usage of the buildings. The importance of these uncertainties and their impact on high-performance buildings has drawn significant attention, and speakers at the 2012 SIAM Conference on Uncertainty Quantification, held in Raleigh, North Carolina, in April, unveiled some of the recent results.

Residential and commercial buildings are the largest single source of energy consumption and pollution in the U.S.; efficient design and operation of buildings, therefore, are necessary to both energy security and environmental stability. During the design process, physics-based energy models are used to perform design trades, in which an optimal balance of first cost, annual energy consumption, and occupant comfort is determined. If these models are to have widespread use in the design community, however, process times (for creating the model, inputting partially certain parametric information, and simulating for annual performance numbers) need to be 50 times shorter, accompanied by 30–50% improvements in accuracy.

Speakers at the meeting presented methods for accelerating the input of parametric information and for capturing uncertainty in model predictions in a tractable way. The challenge is that energy models for buildings typically have thousands of parameters, some describing mundane attributes, like the density of one of the material layers in an external wall, others concerning specifics like the number of people expected to occupy the northwest wing of a building on Friday mornings. Compounding the analysis are computation times on the order of minutes to a half hour, which puts Monte Carlo-like parametric uncertainty experiments out of reach for the designer on a tight time budget. Such numerical sampling experiments can give the modeler an idea of how certain predictions, perhaps on energy and comfort, are based on realistic ranges in the necessary inputs of the model. A dynamical systems sampling method presented at the 2011 SIAM Conference on Applications of Dynamical Systems and further discussed in Raleigh speeds up this process, allowing for studies of parameter sets two orders of magnitude larger than in previous work. (See Figure 1.)

The goal of accelerating the process of parameter specification surfaced again in discussion of an algorithm for critical parameter identification. In this approach, influential parameters are identified and isolated from others that will return little difference in model accuracy---even after hours spent determining their best values. In other words, if the modeler has limited time to input parametric information, it is useful to know which subset of parameters to focus on getting right--the others will have little impact on predictions. As speakers at the meeting showed, only a small percentage of the parameters have this sort of significance, which becomes vital when the parameter set contains a thousand parameters.

Once the design is complete and the building is built, a commissioning process is performed to bring online the computer-based building heating and cooling management system. To many occupants, building management systems are a ubiquitous technology to be taken for granted; in reality, such systems consist of numerous time-sequenced control loops implemented to maintain a comfortable environment for users in the building. As the building ages, or its usage changes, uncertainty begins to take its toll and the management system no longer performs optimally---wasting energy along the way and missing comfort targets. Building management systems are rarely re-commissioned to take these factors into account. The sad truth is that even a building with the finest windows and insulation can squander energy by heating and cooling when not needed for occupant comfort and productivity. (See Figure 2.) 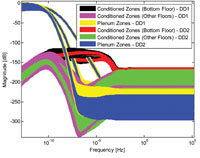 The meeting program included discussions of advanced control approaches that take into account these forms of uncertainty (including sources of static and dynamic uncertainty---like weather). Algorithms that identify the heart of the interconnectedness of the dynamics within a building were presented, with methods for quantifying uncertainty in the dynamics and their connection. Also considered was model-based control that offers a robust solution for uncertainty of this type.

Management of uncertainty in high-performance buildings is just one example of the key role applied mathematics is playing in an energy-efficient future for the built environment. As mathematicians, scientists, and engineers, we are living in an exciting time--in which the impact of our work directly influences the well-being of generations to come.

Bryan Eisenhower is an associate director of the Center for Energy Efficient Design at the University of California, Santa Barbara.