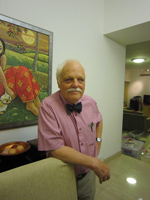 Royal Bruce Kellogg, 1930–2012 Photo by Lisa Tucker-Kellogg
The applied and computational mathematics community lost one of its most talented and thoughtful researchers on April 30, 2012, when Royal Bruce Kellogg passed away at the age of 81, soon after he was diagnosed with a brain tumor. He spent 34 years at the University of Maryland, College Park, from 1966, when he took a position at the university's Institute for Fluid Dynamics and Applied Mathematics (IFDAM), until his retirement in 2000.

Bruce Kellogg was born in Chicago in 1930. He earned his bachelor's degree from MIT, and completed his PhD at the University of Chicago in 1958 under the supervision of Marshall Stone and Lars Garding. He worked as a research scientist in the nuclear power industry before moving to Maryland, where for the most part he held a joint appointment in the Department of Mathematics and the Institute for Physical Science and Technology, or IPST, which succeeded IFDAM. After his retirement, Bruce and his wife moved to an old family home in Landrum, South Carolina, and he took a position as adjunct professor at the University of South Carolina, Columbia. He served as editor of the book review section of SIAM Review from 1996 through 1999.

In the early 1960s Bruce worked on the development of the alternating direction implicit methods. While at Westinghouse's Bettis Atomic Power Laboratory, he presented one of the earliest convergence analyses of an ADI method, which was published in 1963 in the Journal of the Society for Industrial and Applied Mathematics, SIAM's first journal. During the 1970s, he became one of the leading figures in the development of the mathematical theory for finite element methods.

A major theme in Bruce's opus is the numerical solution of singular perturbation problems. His 1978 paper with A. Tsan on difference approximations for such problems is a seminal work in the field, and he continued this research until the end of his life. Another major theme of his research was the behavior of solutions to partial differential equations near corners and interfaces. His 1976 regularity result (with John Osborn) for the Stokes equations in a convex polygon is still frequently referenced today.

In the course of his career he published more than 100 papers, primarily in numerical analysis and partial differential equations, with substantial forays into such areas of application as renal physiology and fluid mechanics.
Bruce kept abreast of developments across a broad swath of pure and applied mathematics. He enjoyed discussions with researchers of all ages and backgrounds, to whom he gave freely of his time and ideas.

His vast knowledge of various areas of mathematics, and beyond mathematics, together with his selfless attitude, made him an ideal colleague, collaborator, editor, and mentor, and inspired great affection in the many people who had the pleasure of interacting with him.---Douglas N. Arnold, University of Minnesota; Susanne C. Brenner, Louisiana State University; and Martin Stynes, National University of Ireland, Cork.