Henri Poincaré, who died 100 years ago. His work on the three-body problem could have settled the author’s dilemma as to his minor thesis topic. But it wasn’t to be.
Philip J. Davis

A review copy of Jeremy Gray's biography of Poincaré,* absolutely magisterial in both scope and treatment, threw me back to my undergraduate and graduate years. Rather than write a conventional review, I prefer to take a cue from the historian and essayist Thomas Babbington Macaulay (1800–1859), who, in dealing with a book, pretty much ignored what the author said and wrote what he himself wanted to say about the topic.

So Speak, Memory: In my junior year in college, I took Advanced Calculus with George David Birkhoff (1884–1944). It was during the first semester that I learned of the existence of the great French mathematician Jules Henri Poincaré (1854–1912). A decade and a half earlier, Birkhoff had been putting the final touches on his proof (circa 1913–1925) of what is now known as the Poincaré–Birkhoff fixed-point theorem (discussed in Gray's book). This achievement immediately earned Birkhoff the reputation of a world-class mathematician.

Not what might be called a rigid lecturer, Birkhoff did not follow our class text, Osgood's Advanced Calculus, with punctilio. But when a topic in Osgood caught his attention, he would free associate out of his vast knowledge and experience. At a departmental tea one afternoon to which math majors were invited, I asked him a question. His answer: Go to the Rendiconti di Palermo, such and such a volume. I never did check it out, but that was my first inkling of a world of professional mathematics that extended far beyond Lancelot Hogben's popular Mathematics for the Million, a best seller that I received as a high school graduation gift. Yes, in class the morning of the tea, Poincaré was rattling around in Birkhoff's brain. This was 13 years after the appearance of Birkhoff's Dynamical Systems, a book with a chapter devoted to Poincaré's geometrical theorem and with 15 index listings for the man.

In the late '40s, when I came up for my PhD at Harvard, instead of a qualifying exam, I had to submit a "minor thesis." The "major thesis" was on a topic of one's own choosing, but the minor thesis was not and in it one was not required to present original results. I went to the office of the department chairman, who at the time was Garrett Birkhoff (1911–1996; son of G.D. Birkhoff and, in 1966–67, president of SIAM). He handed me a small box containing a number of slips of paper. "Pick one," he said. "The Three-Body Problem" was written on the one I selected. "Write on that," Birkhoff said; "you have one month to do it." 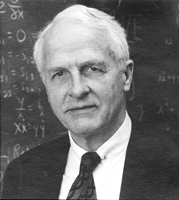 As a graduate student, the author picked a minor thesis topic out of a hat: "The Three-Body Problem." "Write about that," math department chair Garrett Birkhoff said; "you have one month to do it."

Though I'd had had a course in mechanics, this really was a challenge. How to proceed? Ask a friendly member of the faculty for advice? Forget it. I had the Math Reviews. I had the German equivalent: the Zentralblatt der Mathematik. I knew that G.D. Birkhoff had worked on the three-body problem. I got out his Dynamical Systems and turned to Chapter IX, "The Problem of Three Bodies." Skipping the Poincaré material: I found this quote: "It is not too much to say that the work of Sundman is one of the most remarkable contributions to the problem of three bodies which has ever been made."

That settled the matter for me. I read up on the work on the three-body problem of Karl F. Sundman (1873–1949), a great Finnish mathematician. The problem of what to present in my minor thesis was solved. I described how under certain circumstances, the bodies, considered as mathematical points, collide and pass through one another, and do so in a way that can be parameterized by conformal analytic functions.

I seem to have retained no copy of it (no great loss!), but I recall that it contained as epigraphs (1) the quotation from G.D. Birkhoff about Sundman mentioned above and (2) a statement that in those cataclysmic days, it was appropriate to study the collisions of mathematical planets. Hiroshima and Nagasaki were on many minds. I haven't thought about that work from the late 1940s to this day. No Poincaré in my minor thesis? Ah, well, the chips have to fall where they may.

Poincaré! What a man! He seems to be all over the mathematical map: analyst, probabilist, topologist, celestial mechanician, critic of mathematical logic, philosopher, quotable semi-popular author. Today we have the Institut Henri Poincaré in Paris, the Poincaré prize, Poincaré's conjectures, his vision of the mathematical future. Topping all this off are a variety of events laid on in Paris to celebrate the 100th anniversary of his passing.