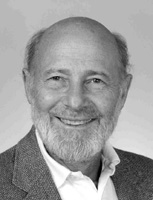 To his long list of honors, Joe Keller of Stanford University has added two Ig Nobel prizes, awarded this fall at a gala ceremony at Harvard. The annual prizes, according to the sponsor, “are intended to celebrate the unusual, honor the imaginative---and spur people’s interest in science, medicine, and technology.” Along with belated recognition for his work on the “teapot effect,” Keller was chosen this year for his mathematical explanation of swaying ponytails.
L. Mahadevan

Joe Keller's contributions to the mathematical sciences have led to many honors, including the National Medal of Science and the Wolf Prize for Mathematics. Looking at his work, it is possible to pick out certain long threads that serve as unifying themes. For example, there are the foundational contributions in the domains of asymptotic analysis, perturbation methods, and hybrid numerical–analytical methods, and their deployment over a very wide range of application areas, including wave propagation and quantum, statistical, and continuum mechanics in both deterministic and stochastic settings. But no less important is his choice of problems, and indeed this rare combination of tool creation and elegant problem-solving at the highest level is perhaps the defining characteristic of his work as a mathematician–scientist.

Last month, in the riotous ceremony that accompanies the annual awarding of the Ig Nobels, he was also recognized for his contributions to the funny sciences, twice (he may well be the first double winner). The first of his Ig Nobels corrected an omission (dating from 1999) for explaining the teapot effect and the second for work published in 2010 on the swaying of ponytails (shared with a group from the UK who calculated the shape of a ponytail). And what precisely were the prize-winning contributions?

Anyone who has poured tea from a kettle knows to be wary of the dribble along the spout that can ruin everything. Most scientists, asked to explain this effect, will mumble something about surface tension . . . NOT! Inspired by experiments of the rheologist Marcus Reiner (who poured colored tea underwater, where interfacial forces are unimportant but the effect persists), Keller wrote a note [2] about how inertial effects (and Bernoulli's principle) can explain this phenomenon. Nearly 30 years later, with J.-M. Vanden-Broeck, he worked out a more complete theory [5,6], which was recognized by the 1999 Ig Nobel, though Keller's contributions were inadvertently forgotten. In an interesting recent addendum, a group of scientists showed that by coating the spout with carbon black, they could change the wettability of the teapot and thence the effect, subtly modifying the role of inertia [1]---and showing that good problems never die!

Keller is an avid walker and runner, and the work that earned the second Ig Nobel was likely inspired by the swaying ponytails of runners in front of him during his morning runs. Why, he asked, does a ponytail swing from side to side while the head bobs up and down? The key is an instability of a flexible string forced periodically and vertically at its boundary. In a paper published in 2010 in SIAM Journal on Applied Mathematics [3], Keller showed that under some fairly general assumptions, it is possible to derive a Hill equation for this phenomenon, which arises generically in the theory of parametrically driven oscillators. (The same mathematics appears in many situations; it is, for example, the theoretical basis for the "ion" trap [4] for which Wolfgang Paul and Hans Dehmelt received a Nobel Prize in 1989.) This insight allowed Keller to deduce the conditions for instability and, moreover, to calculate that for a ponytail bobbing at a frequency of a few hertz, the most unstable length is about 25 cm. Test it yourself!

Joe's work reminds us, charmingly, why we do what we do. Nature's infinite variety continually beckons the observant and curious mind, making people think and then making them smile. Congratulations, Joe, and thanks for keeping us smiling.

L. Mahadevan is a professor of applied mathematics, physics, and organismic and evolutionary biology at Harvard University. He obtained his PhD with Joe Keller and is also an Ig Nobelist (2007).